Posted on December 5, 2017 by Peter Stampfli

In “further hyperbolic kaleidoscopes” I used two straight lines and a circle to make a triangle that defines a kaleidoscope. For k,n and m-fold rotational symmetries at its corners, the sum of its three angles is π(1/k+1/n+1/m). If this sum is larger than π we have to use elliptic geometry. For (1/k+1/n+1/m)>1 the point of intersection between the two straight lines always lies inside the circle that closes the triangle. We can do the same calculation as for the hyperbolic kaleidoscopes, but now we have to use the circle inversion to map points outside the circle to its inside. The circle is bent towards the outside and acts a bit like a magnifying concave mirror.

There are only a few choices for k, m and n that give elliptic kaleidoscopes. For m=n=2 we can use any value for k that is larger than 1. The center of the circle lies at the intersection of the straight lines and the circle crosses the straight lines at right angles. This gives us rosettes with the same symmetries as discussed earlier in “combinations of mirror symmetries“. But now we use explicit inversion at the circle instead of symmetric mapping function. Thus there is not a hole at the center and less distortion. A typical result looks like that:

More interesting are the remaining kaleidoscopes. They have the same symmetry as the tetrahedron, the octahedron and the icosahedron. An octahedron has a four-fold rotational symmetry at its corners, where four triangles meet. At the center of the triangles we have a three-fold and at the middle of its edges a two-fold rotational symmetry. A corresponding kaleidoscope has the same symmetries. It generates a stereo-graphic projection of a sphere with octahedral decoration as shown in this image: 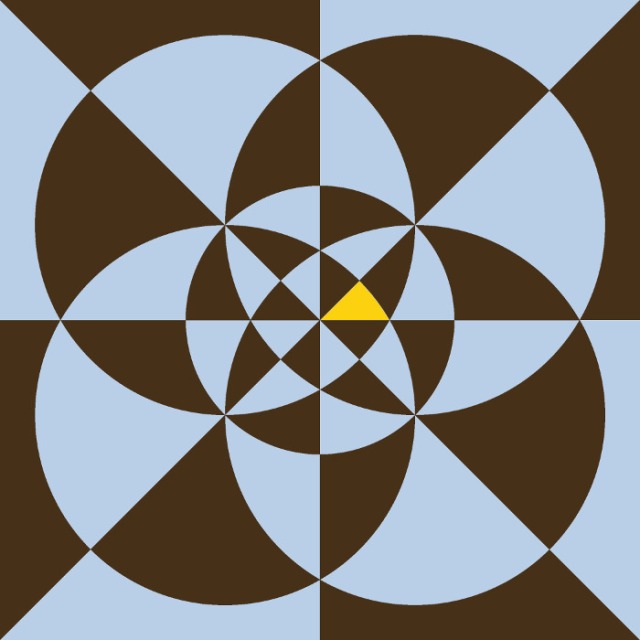 The yellow triangle is the basic kaleidoscope. The dark brown triangles are its images with an odd number of reflections and inversions and images resulting from an even number are light blue. This is a typical image of this kaleidoscope: 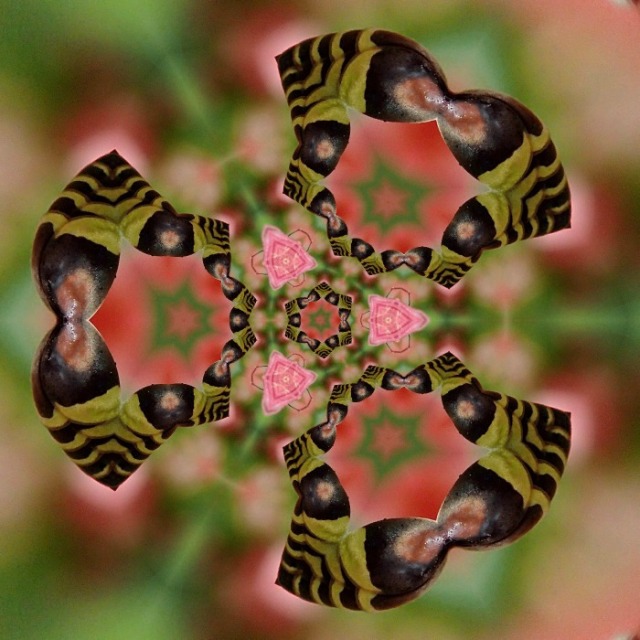