Posted on February 8, 2013 by Peter Stampfli

In the earlier post “Why these tilings are not periodic” I showed that the Ammann-Beenker tiling is quasiperiodic because it arises from superimposing two square grids with rotated by 45 degrees. As seen in the same direction we have the periodic lengths of the side of the squares and of the diagonals. Thus the periods have an irrational ratio of the square root of 2. The joint grid repeats only approximately and never exactly, resulting in a quasiperiodic tiling.

Then I tried to get a periodic approximation by changing the lengths of one of the grids. Thus the ratio between the length of the sides of one grid and the diagonals of the other grid becomes rational and I would get a periodic tiling.

But I neglected that the squares of the two grids have different sizes. This resulted in wrong corner points of the new tiling. Additionally, I got other tiles than squares and rhombs. In short, this attempt failed.

Here I am using the dualization method. Again, I am using two square grids. One of them is scaled to get a rational ratio between the periodic lengths in x- and y-direction. This gives periodic tilings with rhombs and squares approximating the Ammann-Beenker tiling.

For a first example I multiplied the coordinates of one grid by the factor (3/2)/sqrt(2)=1.179. This gives a short combined periodic length of 3 times the period of a single grid. The resulting dual tiling also has a short period and a small elementary cell: 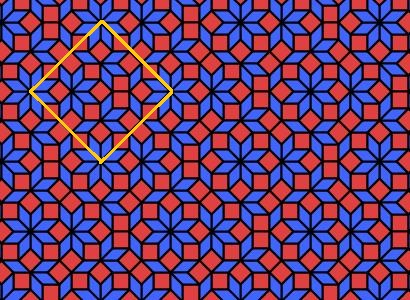 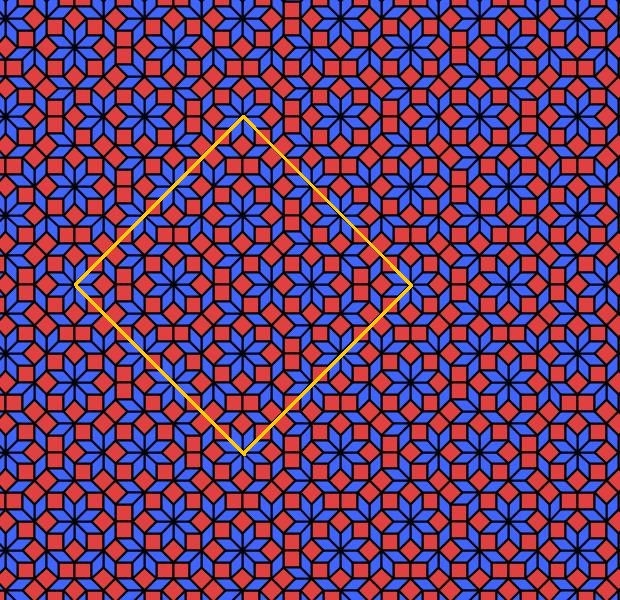 Periodic approximation of the Ammann-Beenker tiling with a larger elementary cell.

This could be continued. We can make periodic approximations of the Ammann-Beenker tiling with very large periods. Looking at a finite part of a tiling you cannot know if you see the genuine quasiperiodic tiling or such an approximation.