In the last post we got a hue from two wave functions resulting in two-color symmetries. The method can be extended to any number n of wave functions f_i(x,y). Just think of n points distributed evenly on the unit circle with coordinates

where m usually divides n. Some of the points may coincide. We make a weighted average of these points using the wave functions as weights, thus

For quasiperiodic designs the wave functions are

where s=1 or 2. Then the hue α results as before from

If both u and v are zero this is not defined and we put brightness equal to zero. The atan2-function should be used to get the full range of results from 0 to 360 degrees. The symmetries are sometimes difficult to recognize because the blue color is much darker than the green for the same brightness value.

Here some results for twelve-fold rotational symmetry. Usings=1, n=6 and m=1 we get a six-color symmetry: 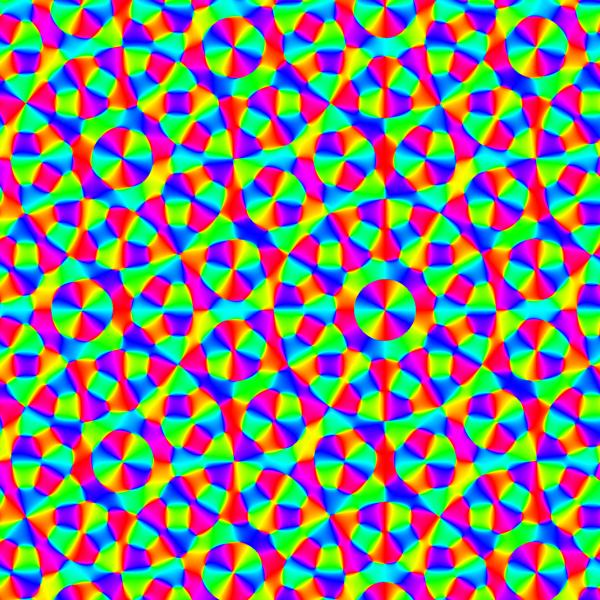 We see that a rotation by 30 degrees changes red into yellow, yellow into green, then come cyan, blue and magenta. A three-color symmetry results from m=2:

Generally, the nonlinearity of this scheme makes it nearly impossible to predict results or to explain them.