Somehow, I am trying to make up a Fourier series for quasiperiodic tilings. You can get a good idea about Fourier series from “An Intuitive Explanation of Fourier Theory” at http://cns-alumni.bu.edu/~slehar/fourier/fourier.html. Or have at least a look at the pictures if you don’t like the hard math.

We first look at periodic functions in one dimension. If we want mirror-symmetry at x=0 we can begin with a simple set of cosine functions f(x) = cos(k x). To get more details we can add higher harmonics

Choosing the right coefficients a we can approximately synthesize any periodic mirror-symmetric function f(x). Here, the spatial frequencies of the waves correspond to periodically spaced points k, 2k, 3k, ….

In two dimensions periodic functions can be made up similarly. With

This can approximate the colors of any periodic picture with four-fold rotational symmetry.  Now the frequencies form a square lattice with the points (k,0), (0,k), (k,k), (k,-k), (2k,0), (0,2k) and so on. It is important that all these waves fit to the basic wave and the corresponding square tessellation. 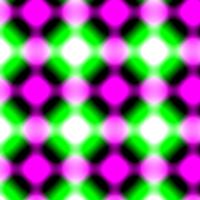 What changes for waves and functions that should fit to a quasiperiodic tiling of n-fold rotational symmetry ? As done in earlier posts, we can use a set of n cosine waves with the same size k for the frequencies. Their directions are regularly spaced. But this is simply a basic set and we might want to have higher “harmonics”. Then we know that their frequencies can not make a periodic lattice. Instead they are the corner points of a quasiperiodic tiling.

Take as an example eight-fold rotational symmetry. The basic set of waves is

Their frequencies (k,0), (k/sqrt(2),k/sqrt(2), (0,k) and (k/sqrt(2),-k/sqrt(2)) already do not agree with a square lattice. Instead they are corner points of an Ammann-Beenker tiling with tiles of edge length equal to k. Thus we might use the Ammann-Beenker tiling to choose the frequencies for a synthesis of quasiperiodic structures and tilings with eight-fold rotational symmetry. At first sight we seem to running in circles.

Actually we get interesting new results. The point (k,0) lies at an obtuse angle of one of the eight rhombs making a star around (0,0). It is also a corner of a square. The diagonally opposed point of the square lies at ([1+sqrt(2)]k,0) and thus we have a set of waves with higher frequency

which fits nicely with the basic waves f(x,y), see the figure below. Note that the frequencies are larger by the irrational factor (1+sqrt(2)). This is not at all “harmonic”.

Basic set of eight waves (shown in green) together with eight waves (magenta) of frequencies increased by the irrational factor (1+sqrt(2)) fitting together. Note that green and magenta added together gives the small white dots.