Doubling the tessellation of hexagons and triangles

Tessellation with hexagons and triangles.

Grid for making this tiling.

With the dualization method we can use all semiregular tessellations of six-fold symmetry to make quasiperiodic tilings of 12-fold symmetry. We begin with the tessellation of hexagons and triangles. It has many intertwined stars. Its generating grid consists of rhombs. At the corners with an obtuse angle are points with three lines. They make up the triangles. At the corners with an acute angle six lines meet. These points correspond to the hexagons.

From two such grids we get a quasiperiodic tiling: 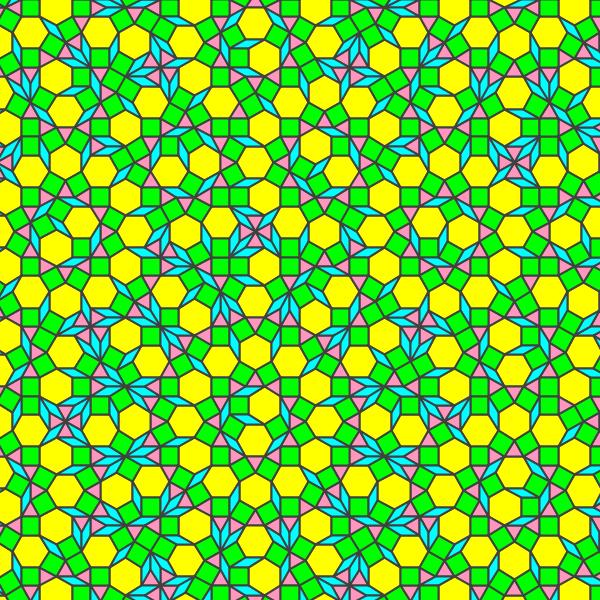 Tiling of twelve-fold symmetry obtained from the semiregular tesselation of hexagons and triangles.

Part of the double grid that makes such a ring.

As in the Socolar tiling hexagons come in pairs and rings of hexagons appear. But the rhombs between the hexagons are now outside the ring and the squares are inside. This inflates the rings and leaves place for the triangles. As before we want to know where these rings lie. We see that there are hexagons in the single grid. Two hexagons have to form a twelve-pointed star to give as a ring.

Thus we get the centers of the rings from the projection method using L=2 for the size of the hexagons. This gives us a new tiling:

Tiling resulting from the position of the rings.

This tiling is quite different to the tiling above. Thus the tiling one gets from doubling the tessellation of hexagons and triangles is not self-similar. At first sight this tiling resembles the Stampfli tiling. But there are much more stars of twelve rhombs. Their distance is only 7.2 times the length of a side of the tiles instead of 13.9 as in the Stampfli tiling. The tiling may be self-similar.

Based on this I claim that the tiling I got from doubling the tesselation of hexagons and triangles is not related to the shield, the Socolar or the Stampfli tilings.

The exact distance between the stars of rhombs is here sqrt(2+sqrt(3))*(2+sqrt(3))=7.209. In the Stampfli tiling this distance is larger by a factor of sqrt(2+sqrt(3))=1.93. It is interesting to know that sqrt(2+sqrt(3))=(1+sqrt(3))/2. I do not know whether this tiling has already been presented elsewhere. Its self-similarity has yet to be studied. For simplicity I will call it the L2-tiling because it results from the parameter L=2.