Exhibition of the self-similarity of the tiling

In the last post, I claimed that the tiling one gets from two hexagon-grids is self-similar. But this is not clear from the image I have shown because it has only about 2000 tiles. This is not enough. Just look at the lines between the perfect stars of 12 rhombs. Their distance is equal to 7+4*sqrt(3) = 13.8 times the length of a single tile. A square with sides of this length would thus contain about 300 tiles. Thus we can see only a few of these hyper-tiles given by the stars.

Thus I produced a really large image of roughly 50000 tiles. Here we can clearly see the self-similarity. Note that the stars of 12 rhombs are always surrounded by a circle of 12 other rhombs. 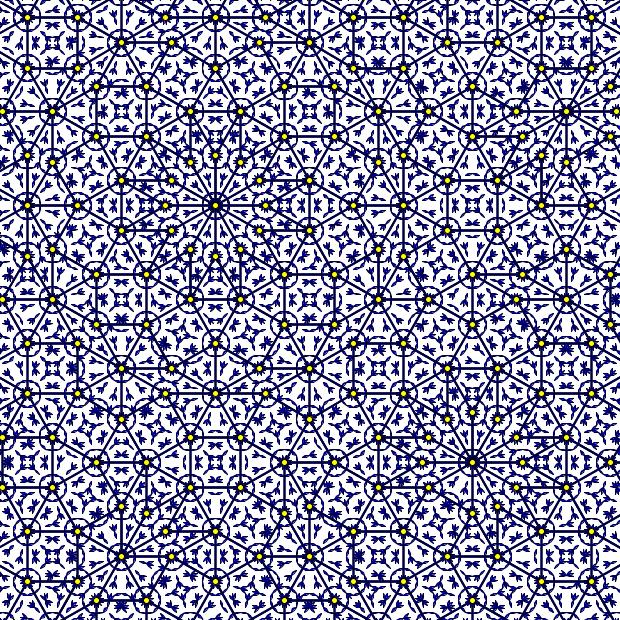 Self-similarity of the quasiperiodic tiling. Of the basic tiling only the rhombs are shown in blue. The yellow points show the stars of 12 rhombs. They are corner points of the same tiling at an inflated size. The black lines show the edges of the resulting tiles.

To get such an image I had to use same advanced programming methods, such as can be found in the excellent book “computational geometry” by M. de Berg, O.Cheong, M van Kreveld and M. Overmars. Thus the computing time is just proportional to the number of tiles and my substandard notebook needed less than one minute. Naive programming results in execution times proportional to the square of the number of tiles, which would be prohibitive.